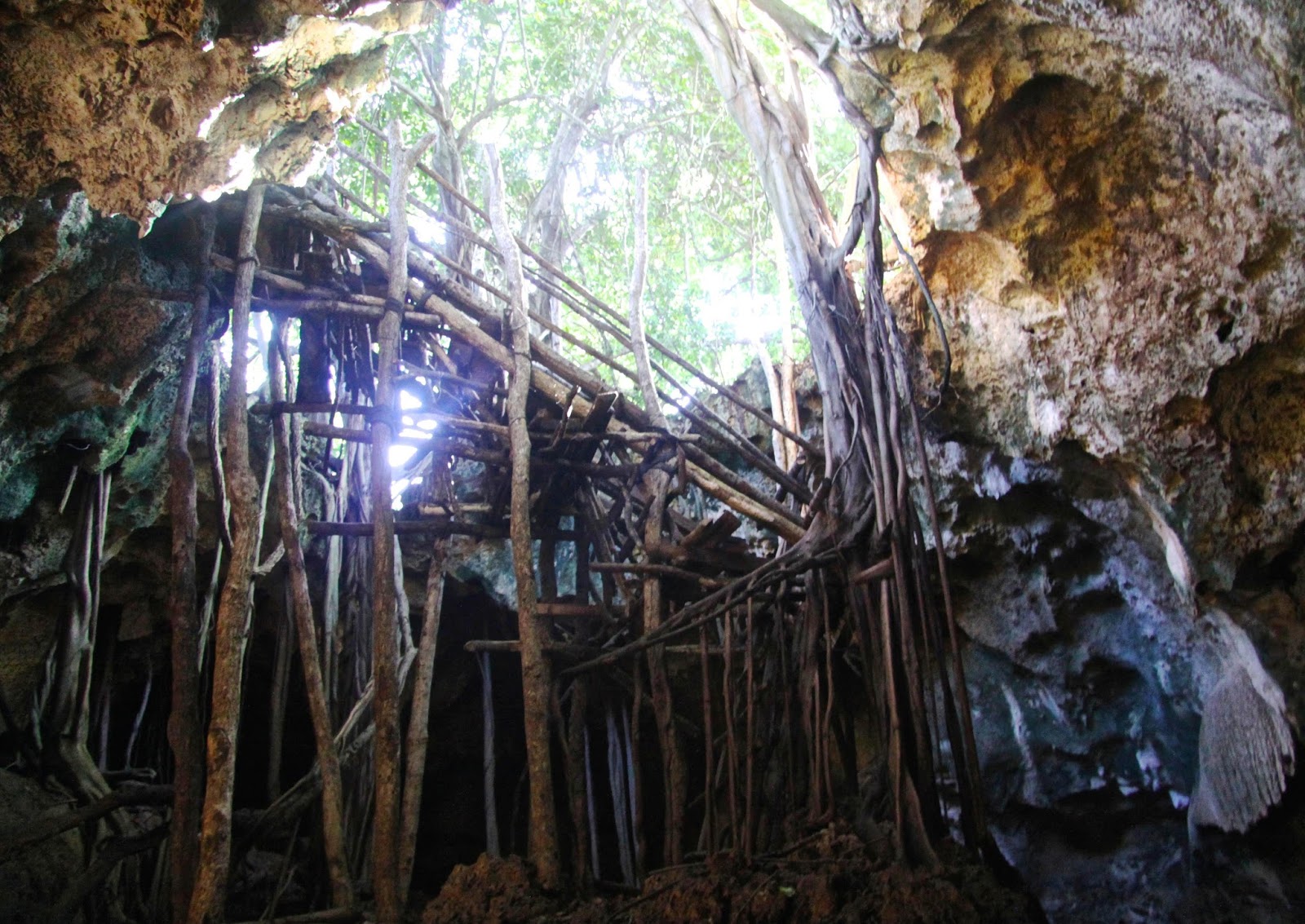 After an approximately twenty minutes boda boda ride from the tranquil fishing village of Shimoni skirting my way through the snaky murram roads, I arrive at Fikirini village in Tswaka. A village of the hidden gem of the Three Sisters Giant Caves, the second largest cave system in East Africa.

I meet my guide Ali Toya who takes me through my odyssey at the magnificent caves complex comprising of the Mdenyenye, Pangani and Kisimani caves. The environment here is cool and secure, and the lovely vegetation makes the area a unique haven for photograph lovers.

We first descend into the largest of the three caves, the Mdenyenye Cave using a wooden staircase well crafted by the locals. Toya takes his moment to first explain the meaning of the word ‘Mdenyenye’ to me.

“Mdenyenye is a word used by the Tswaka community to mean the act of ascending or descending using a rope or a hanging root. This is the largest coral cave in Kenya.” He elaborates.

As we get down into the caves we are welcomed by thousands of bats flocking around after sensing our presence in their domain. A unique encounter indeed as at some angles you have to duck to avoid the bats that were swooping and darting around the cave chambers. The atmosphere down here is thick and humid as we walk inwards on the soft cave floor covered with bats’ poo.

“Don’t be afraid. Some bats can even cling on your body.” Toya explains after seeing me getting petrified.

It is a unique adventure not for the faint heartened! But how was this hidden treasure used by the local Tswaka community in the past?

According to my guide, during the times of slave trade, the local community used to hide inside the Mdenyenye cave to evade those who came to their village looking for slaves. Today this cave is home to seven bat species including the Egyptian fruit bats, common bent-wing bats, long-fingered bat, tomb bats and the angle-faced bat. More than 40,000 bats live inside these caves a number that is believed to be the highest in Africa.

Though not well established, the Three Sisters Caves are a potential attraction of Kwale County. Most of the people who visit these caves are either tourists or researchers and scientists who come here to study bats, the stalactites and stalagmites formation in the caves or even the plant life in and around the caves. Today these caves are used as a spiritual site (Kaya) of the local Tswaka community.

While at the Fikirini caves site one can also have an unforgettable memory of viewing various bird species and also tour the Fikirini village for a taste of the natural refreshing coconut drink known as the madafu as you are entertained by traditional Digo dancers.

Fikirini is located at the south eastern part of Kwale County near the fishing village of Shimoni, an approximately 45 minutes drive from the Beach resort of Diani. You can get to this place using a cab or use a public means of transport to Mwambao along Shimoni road and hire a boda boda to Fikirini village.

Have you ever visited the Three Sisters Caves of Fikirini? Drop us a comment on how your experience was like.