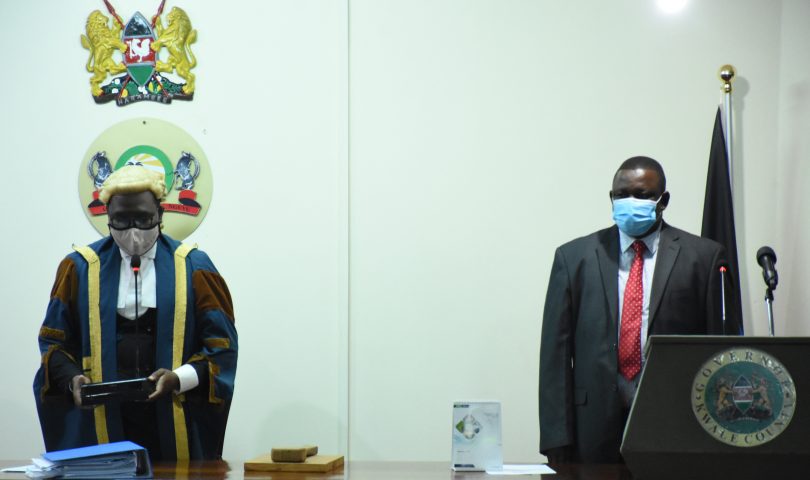 Kwale Governor H.E Salim Mvurya delivered his much-awaited State of the County address at the County Assembly on Tuesday afternoon, speaking on matters including the commitment of his government to transform Kwale into a competitive, industrialized and socio-economically sustaining and secure county.

Governor Mvurya stated that Kwale county’s success in development has been realized through close collaboration and support from local and international partners.

“This partnership will be critical as we move forward to implement our second-generation County Integrated Development Plan, CIDP 2018-2022,” he said.

The Governor stressed that the county government of Kwale requires at least Shs. 64 billion to fully implement all the proposed programs in the County Integrated Development Program, hence urging the Senate to find an amicable formula of revenue allocation to counties, that does not reduce but instead increases funding to all counties particularly the marginalized.

“If implemented, the 3rd generation formula proposed by Commission for Revenue Allocation will take away Shs 1.1 billion from Kwale’s share of the Equitable Revenue and a further Shs 5.1 billion from all Coast region counties cumulatively,” he warned.

Governor Mvurya said since the advent of the coronavirus pandemic, the county’s economy has been affected following series of restrictions imposed by the government.

He stated that Kwale has so far recorder 151 positive coronavirus cases since mid-March 2020, when the first case was reported. Out of these cases, 88 are foreign nationals and 63 Kenyans out of which 33 are Kwale county residents.

The Governor however assured Kwale residents that his government has put in place adequate measures to effectively respond to the pandemic.

“We have identified five mandatory quarantine centers, at least one in each Sub County that can cumulatively hold up to 100 people. We also have isolation centers at Samburu, Kinango, Kwale, Lunga Lunga and Msambweni hospitals with a combined capacity of 340 beds,” he said.

He also confirmed that the county government of Kwale received a Shs 137 million grant from the government to help fight the spread of the coronavirus. Shs 30.5 million was allocated for the expansion of the Covid-19 Unit at the Msambweni Referral Hospital to accommodate 200 additional isolation beds, a move that will raise the number of isolation beds in the county to 540.

“Approximately, Shs. 106.5 million was allocated for purchase of Personal Protective Equipment (PPEs), ventilators, beds and other medical supplies,” he added, urging everyone to observe the containment measures issued by the State Department of Health.

On matters education, Governor Mvurya said the county government of Kwale has invested heavily in development of education that promotes uptake of appropriate technology and innovation.

He assured that going forward, the county government will continue focusing on the ‘Elimu Ni Sasa Initiative’ as an affirmative action to improve on the quality of education and step up the efforts to poverty reduction in the county.

Under this program the number of students under the National School scholarship program rose to 5,149, and those in universities to 2,000 by the end of the 2019/2020 financial year, with more than 50,000 others receiving support in Extra County, Sub County schools, private universities and colleges.

“A similar initiative has been introduced to cushion learners attending the Vocational Training. The county government has set aside Shs 43 million to pay Shs 15,000 for each learner joining Vocational Training Centers,” he added.

The Governor also noted that the construction of the second public owned Teachers Training College in the region is ongoing in Kinango. The project that is implemented in three phases is estimated to cost Shs 300 million and is expected to be complete by mid 2021.

The Governor talked on the commitment of his government to ensure the people of Kwale get quality, affordable and accessible healthcare services irrespective of their social standing. He stated that the county government hired an additional 1,082 healthcare workers raising the number of staff from 737 in 2013 to 1,819 at the moment.

“In the last three years, we have increased and improved the number of hospitals from three to five. Samburu, Kinango, Kwale and Lunga Lunga are now Level 4 hospitals while Msambweni hospital has been upgraded to Level 5 and is our County Referral Hospital with an equipped Intensive Care Unit, Renal Unit and a CT-Scan machine. The services of the referral hospital are complemented by the availability of a Blood Bank built in collaboration with GIZ and Base Titanium,” he added.

He stated that the county government has implemented significant projects to provide water across the county.

“We are also working with the State Department of Water, and the World Bank to implement the Shs 2.5 billion Mwache dam project with its auxiliary services as well as the construction of Makamini dam to a tune of 600 million,” he added.

Governor Mvurya also reminded that over the last three years the county government has sunk and rehabilitated over 150 boreholes that are currently in use, and a further 35 water pans that are completed.

“Currently, there are 70 pipelines covering approximately 350 kilometers that are supplying a total of 53,640 households,” he said.

The Governor also stated that the county government has worked closely with the national government to transform the county’s transport infrastructure.

This has seen the improvement of several county roads to bitumen including the Lunga Lunga – Vanga, Samburu – Kinango, Kanana – Shimoni and Milalani – Kilulu roads. He also said that the ongoing Dongo Kundu bypass project and the expansion of Diani Airport will further open up Kwale county’s economy.

On matters agriculture, the Governor said his government has set up a firm foundation for sectorial transformation to guaranteeing food security, poverty reduction and employment creation by inculcating an agribusiness culture.

Governor Mvurya assured that the county government of Kwale is finalizing the spatial plan that will provide guidance in terms of land use planning, and a number of part development plans (PDPs) are also in their final stages of approval to facilitate enforcement of development activities in all the affected urban centers in the county.

“The gazette notices of municipality charters establishing Kwale and Diani as municipalities paved the way for a seamless transfer of the municipalities’ functions to their respective boards. We are now focusing on having Kinango and Lunga Lunga also upgraded to municipality status,” he said.

The Governor however stressed on the need to foster stability to continue the transformation agenda for Kwale county.

“There is need for all of us to continue working closely with our development partners, among them the Jumuiya ya Kaunti za Pwani (JKP) at the regional level, national government, non-governmental organizations, international and bilateral institutions, friends and all other stake holders that continue to partner with us in implementing our development agenda,” he concluded.