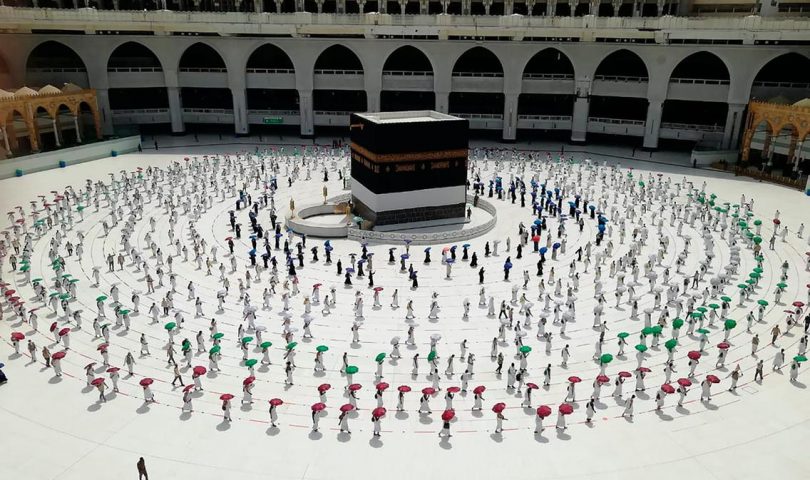 Muslim pilgrims on Wednesday July 29, 2020 commenced the observance of the annual Hajj ritual in the holy city of Mecca, amidst strict measures due to the coronavirus pandemic.

Unlike normal Hajj rituals which draw over 2 million Muslims from across the world, this year’s number of pilgrims has been drastically scaled-down to up to 10,000 people by the Saudi Arabian authorities.

According to the Saudi Health Ministry all those observing Hajj were first tested for the coronavirus and self-quarantined for several days to make sure they are not infected.

All pilgrims performing Hajj are required to wear face masks and observe physical distancing for the five days period they will be in Mecca.

Majority of those observing Hajj this year are Saudi nationals and a few foreigners residing in the Kingdom, who are aged between 20 and 50, and in good health.

They will also be required to observe a one-week mandatory quarantine after completion of the Hajj.

Saudi Hajj authorities have cordoned the Kaaba, and pilgrims will not be allowed to touch it as usual, to avoid chances of coronavirus infections.

In other arrangements, dedicated health centers have been set up, with presence of mobile clinics and ambulances to take care of those who will require emergency health services.

This is the first time in Saudi history that foreign pilgrims were not allowed to take part in this annual ritual due to health concerns over the coronavirus pandemic.

The Saudi Arabian government is covering the expenses of all pilgrims this year. Among the expenses covered are providing them with meals, hotel accommodation, transportation and health care.

This year’s pilgrimage is performed at a time when Saudi Arabia has recorded over 270,000 cases of coronavirus infections and over 2,800 deaths.

Hajj which is one of the fundamental pillars of Islam, is an annual spiritual experience undertaken by Muslims at least once their lifetime to express their faith in and servitude towards Allah.

It is performed in the month of Dhul-Hijjah, the 12th month of the Islamic lunar calendar, between the 8th and 13th day of this month.

The Pillars (Arkaan) of Hajj