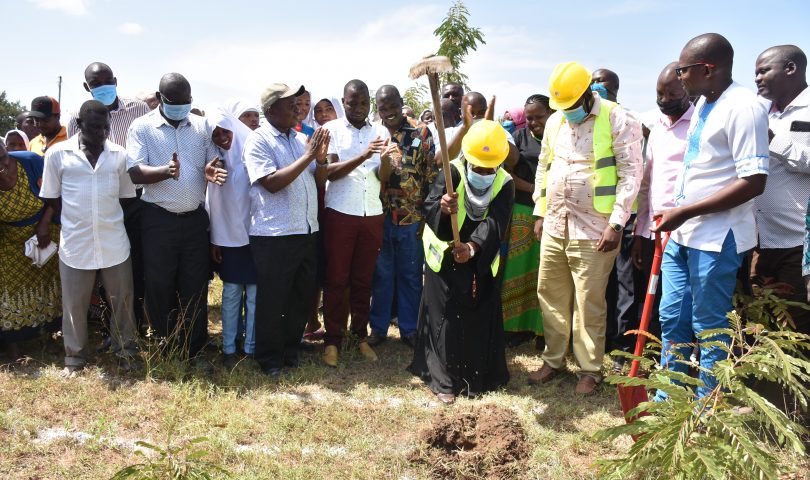 Kwale county residents have been asked to focus on development issues and shun egocentric leaders spreading conflict-ridden politics across the county.

Addressing the people in Kinango town after the official opening of a twin workshop and groundbreaking of a hostel project at Kinango Vocational Training Centre, Kwale Governor H.E. Salim Mvurya warned that some of those aspiring to vie for leadership positions in the 2022 general election are dividing people along tribal lines.

“Some have started coming to you spreading propaganda about the county leadership. Be cautious with such politicians who are scheming to destabilize our development agenda,” the Governor said.

Governor Mvurya reminded the people of Kwale that this county has earned country wide reputation in matters development all because of their visionary leadership with his Deputy Fatuma Achani.

The Governor said the county government of Kwale will continue working with the national government under the leadership of president Uhuru Kenya, pointing out that its through such collaboration that several development projects have been successfully implemented in Kwale county.

“We will continue working together with the national government because that has enabled us accomplish several projects especially infrastructure development projects such as the Samburu/Kinango, Lunga-Lunga/Vanga and Kanana/Shimoni roads,” Mvurya said.

He also disclosed that several other projects are to be implemented in Kwale county by the national government which include the construction of a modern national school and a regional Institute on Blue Economy that will benefit students from the five Eastern African countries.

“Apart from that, the county government is also implementing several flagship projects among them the Kombani Fresh Produce Wholesale Market, and a fruit processing plant in Kubo South,” he added.

Governor Mvurya also encouraged more investors to come and invest in Kwale saying that the county has a conducive environment for investment.

On matters education, Governor Mvurya urged youth across the county to have focus in life by taking their studies with seriousness.

He said that through the ‘Elimu Ni Sasa’ initiative, Kwale county government has invested in a reputable bursary program that has positively transformed education standards in Kwale.

Through this program around 5,149 students are getting full scholarships in various national schools, 2,500 students in universities while over 52,000 others get the normal bursaries.

“The county government of Kwale is also paying a total of Shs. 15,000 to every student who joins a Vocational Training Centre in the county,” Mvurya added.

The Governor who reiterated that Kwale county desires responsible leadership urged the people of Kwale to support his Deputy Fatuma Achani for the gubernatorial seat in the 2022 general elections.

He stated that it is only through devoted servant leadership that his development vision for the county will be sustained.

On her side, Deputy Governor Fatuma Achani asked political leaders across the county to avoid abusive and provocative politics, and rather focus on development issues saying that the people of Kwale need visionary leadership and not propaganda politics.

“Governor Mvurya’s leadership is exemplary, and it is our responsibility to fully support him and accord him maximum respect so that he can be able to take a national position after he finishes his term in 2022,” Achani said.

Achani who has been a champion of women empowerment in Kwale, urged the electorates to have faith in her saying she is the right person to the county leadership after Governor Salim Mvurya completes his term next year.

“Those claiming they cannot be led by women are late because Fatuma Achani is already in leadership as the Deputy Governor of Kwale county. Don’t be deceived by such people who are anti-development,” she reminded.

Her sentiments were echoed by Members of County Assembly Anthony Yama, Chirema Kombo and Joseph Tsuma Danda from Kasemeni, Samburu/Chengoni and McKinnon Road wards respectively who also called upon the people of Kwale to join hands and support the Deputy Governor’s bid to take the county leadership in 2022.