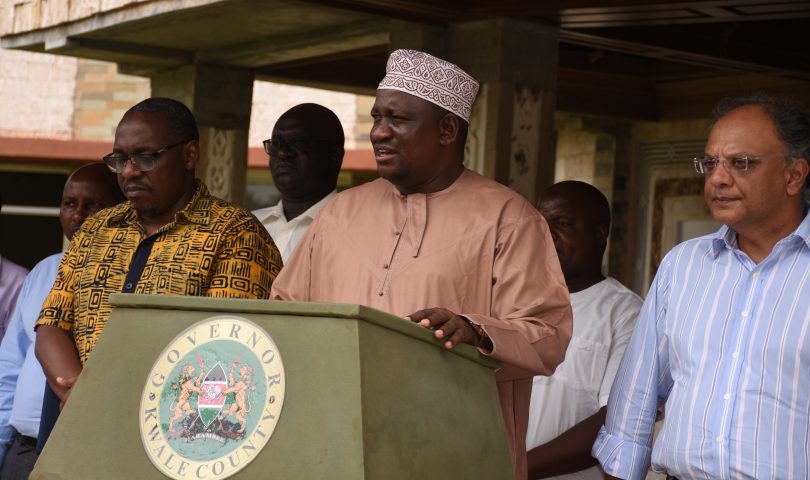 The government has set aside Kshs 1.1 billion to set up the East African Centre of Excellence for Blue Economy in Kwale County.

Addressing the media after fruitful discussions with Principal Secretaries Professor Kevit Desai of State Department for East African Community, and Professor Hamadi Iddi Boga of State Department for Crop Development and Agriculture Research, Kwale Governor H.E Salim Mvurya said the decision to build the Centre of Excellence in Kwale was agreed upon after a series of engagements between the county government and the national government.


Governor Mvurya stated that the Regional Centre will be constructed on a 40 acre piece of land at Kitsakamatsa in Kombani, Matuga Sub County.
“This Centre of Excellence will be very useful in enhancing skills especially in improving our interventions in the blue economy,” Mvurya stated.

Already the county government of Kwale is in the process of finalizing the registration of a title deed in the name of the institution that will be hosted by the Kenya Coast Polytechnic.

Governor Mvurya is optimistic that once completed, the East African Centre of Excellence for Blue Economy will not only create employment opportunities to the people of Kwale, but also impart skills to the youths and build the capacity of local stakeholders including fishermen on the blue economy.

“We are also drafting a memorandum of understanding between the county government of Kwale and the national government on how this project will benefit the people of Kwale,” he added.

On his side Principal Secretary, Stated Department for East African Community Professor Kevit Desai thanked the county government of Kwale for its cooperation towards the achievement of this project that will commence soon and is expected to take two years to be completed.


Prof. Desai said that the project will consolidate the efforts of Governor Mvurya with respect to championing Technical and Vocational Training, and consolidating the entire value chain of skills from artisans, craftsmen and technologists in a view to promoting skills development, technology transfer and creation of new enterprises in Kwale county.

The Principal Secretary also stated that this Centre will focus on maritime logistics and marine transportation, which are two key areas in the blue economy.

“The East African Centre of Excellence for Blue Economy will at the same time focus on ensuring that we are able to adequately promote the necessary research, policy level and implementation that will benefits the East African community,” he added.

Prof. Desai further stated that this centre will directly help in the achievement of the Kwale County’s Integrated Development Plan with respect to blue economy, mining, agriculture and other key areas hence creating an opportunity to young men and women to access employment.